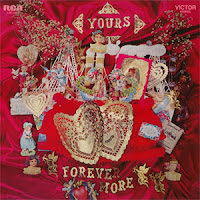 As a teen growing up in New Britain, I was captivated by radio. I spent hours calling into my favorite DJ at WPOP-AM (then a top-40 station), talking on-air to my favorite DJ (Lee Babi Simms, who went on to a huge and influential career in Los Angeles), requesting favorites like the Animals version of C.C. Rider, which they called cleverly called See See Rider.

Then along came underground radio on the FM dial, and I listened to WHCN-FM (then an alternative, diverse, DJ programmed station), and my ears were opened to the Velvet Underground, Muddy Waters, John Coltrane, Jimi Hendrix, Moby Grape, the Band, Love and lots of other musicians who never slipped onto the then wide-open playlists of the top 40.

One of the morning DJ's had a favorite album, which became a favorite of mine, and everyday he played an extended, jazzy song which began with the simple words, "This is a tearjerker." The song was Good To Me, and the band was Forevermore.

I was one of the few in the US who bought a full-priced copy of the album Yours, which featured album artwork out of a Victorian-era scrapbook, an absence of any meaningful liner notes, and a small, blurry photograph of a group of hirsute musicians with Scottish names.

I could never find out much about the band, but after the album tanked I bought dozens of copies, some for as little as 29 cents, in retail and record store bargain bins, and handed them out to friends who appreciated music. The album was amazingly accomplished and diverse, moving comfortably through folk, jazz, blues, country (doing as good a job, as say, Traffic) -- this was a Scottish group who liked American music. And like many albums of the era, it included throwaway, novelty numbers in the Oo-blah-di, Oo-blah-dah school.

I listened to that album for years, and when I was in college and read somewhere that RCA had released the band's second album Words on Black Plastic, I wrote RCA to get a review copy, and a label representative wrote back denying that the album existed (I think I still have that letter somewhere). I subsequently found the album in a NYC record store. The second album spends less time with throwaways, and I always swore that the musicians had obsessively listened to two albums which were also favorites of mine, The Band's Music from Big Pink and Jack Bruce's Songs for a Tailor. 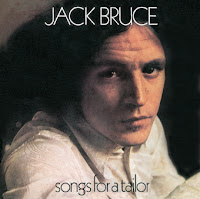 A few of the musicians from Forevermore, went onto greater fame as founders of the Average White Band (Alan Gorrie and Onnie Mair), making really tacky funk and R&B during the mournful disco era.

The original Forevermore album is nearly forty years old, and without a turntable at home, I was rarely able to listen. A few weeks back, I found an online listing of a German release (completely unofficial, I'm sure), of a CD which contained both albums on a single disk, at a totally reasonable price. In addition, I found a place online, where the first album could be downloaded. Since the CD arrived, I've been listening non-stop for about a week. In the process of my search, I found a blog by English writer Tom Cox, extolling the virtues of Forevermore, and another which places the first album on a list of lost albums, which can now be more easily found on the web (thereby spoiling the fun of the search). In a recent article for the Guardian he says:

Few records fulfil the 'great lost album' criteria on as many levels as Yours Forever More, the debut by Simon Napier-Bell prodigies Forever More. From its slightly accidental existence (Napier-Bell was merely fulfilling a contract), to the two very odd Ringo-ish country filler tracks (real lost albums need eccentric filler!) to Permissive, the grimy forgotten B-movie in which its gnome-like creators starred, to the album's childishly hand-drawn gatefold sleeve, it begs to be preserved exclusively on 12-inch cardboard, preferably with Sellotape in one corner and a former owner's ancient address on the inner side.

Or at least that's what I used to think, back in the days when I would waste afternoons scouring Greater London's record shops for extra copies. These days, its lack of CD reissue just seems slightly cruel and arbitrary. Sucked of their romance and promise, Lost Albums seem lost in a different, sadder way than before. That's perhaps nothing to get too cut-up about. After all, they're only objects. None the less, some music will always improve with age and demand reinvestigation, and it's hard to suppress a shiver when considering the possible future equivalent of today's Lost Albums: unmanned ghost MySpace pages, replete with ancient tour dates and outdated comments from long-withered porn stars inadvertently having their images used to sell ringtones. Who, you find yourself wondering, will take them home, wipe some 20-year-old lint off their grooves, and love them?

It make me feel better that I'm not the only person who can get obsessed by a song, or album, that has never made it into the digital realm.
Posted by Ed McKeon at 11:22 AM

Maybe once a year I scratch the surface of the web to see if more folks have found Forever More (note that the name isn't one word). I'm glad to see a teensy uptick.

I too discovered the band via college radio. in my case it was the 2 LPs on the shelves at WTJU.

Alan Gorrie recorded "Sylvester's last Voyage" solo, just him and guitar, on a compilation album prior to FM.

Alan (demon bass player) and Onnie played a fair number of sessions in the early 70s, sometimes in the company of the horn section that appears on the FM records. The horn players were in Mogul Thrash with John Wetton.

The great FM mystery is, "What happened to Mick Travis?" His guitar playing is fabulous, a great foil to Onnie. The trail on Mick goes cold after a few steps.

The film "Permissive" features the band in dimly lit out-of-focus performance snippets and is for completists only. I actually bought it from the UK and paid $15 to have it transferred to a DVD I could watch. It is an awful movie.

One last note- Forever More's music is incredibly heartfelt and the albums are, exactly where and when the band intended, really moving.

Thanks for blogging about this great band.

I have a copy of Yours, a mate of mine had it at uni in 72-3 and I spent the next 5-6 years searching for it in every record store I went into. It didn't help that I didn't know whether the band was called 'Yours' or 'Forever More' (or even 'Yours Forever'...)

I eventually tracked it down on a trip to NYC, where I found it in the remainders bin at Sam Goody's for a dollar, the cover was wrecked to hell.

Later with sme research I made the link with AWB. It would all have been easier with the internet.

Love the album to bits and play it as much as I dare.

The SSK in Brussels

Behold! What a jewel this record remains. http://tinyurl.com/6b5eqy

Awhile later and after looking in on the current state of internet info on FM, I can report that Mick Travis' real name is Mick Strode, he played in Band of Joy with Plant and Bonham, and left the biz to become a teacher in the 70s. However, he kept playing, popped out a solo LP, and played a lot of gigs and got rave write-ups, though all rather obscure. He supposedly moved to Brittany a few years ago.

I forget where I found "Yours" but I remember reading a 5 star review in Downbeat (yep-that Downbeat)that extolled the fabulous songwriting and Napier-Bell's arrangements. It became an instant favorite, and one that always elicited a "who's that?" when I played it for people. I've made plenty of copies of my CD for friends, all of whom became instant fans. The CD is not easy to find, but truly worth every penny (mine cost about $20) and is nicely remastered with a foldout of the cover. These are timeless albums (both are brilliant pop music) that truly deserve the undiscovered masterpiece tag. Glad to see someone else rave about these guys. BTW, they sound NOTHING like the Average White Band.

Wow, a Downbeat review - that is news to me.

I have been tracking Mick Strode and have a purported email address for him in Brittany, to which I wrote last Thursday. We'll see if he responds.

I have a SONGBOOK (i.e. sheet music with a color cover, pretty much the album cover) for "Yours", the origin of which I can't recall.

I've assumed that Alan and Onnie, who still have at least some lingering fame, would be impossible to reach and probably not interested in discussing FM. I spent some time looking online for ways to reach them, posted on some fan site, never heard a word. Without their input no one could really write a decent article about them, but I suppose that is really what I have been gathering informnation for in dribs and drabs. Truly a forgotten backwater of music history, but a bit less so thanks to folks who convince their friends. I'll post here if anything further comes up.

This album is so great, and it aligns with a very important part of my past. In the 60's and 70's in the mid-west USA, there was but one radio station - WLS, in Chicago. I knew that FM existed, but I couldn't imagine what use it would be if it couldn't blast 50,000 Watts into half the country and Canada, and besides, what could it offer that the top 40 played slavishly on WLS couldn't offer.

Enter a wannabe musician, pot head, and bad influence. I began smoking weed, listening to stereo, and becoming exposed to music I'd never heard before.

Good to Me, Sylvester's Last Voyage, It's Home, Jesus, is there a bad track on the album?

I walked into a record store on State Street in Madison, WI and asked if they had the album. "You're in luck, it's going back tomorrow to be remaindered." I saved this particular copy from being melted down and used to make dominoes or some such. I played it to death until it sounds as though the last equipment used must have used a golf shoe as a needle.

Someone posted "Good to Me" on YouTube, and I'm thrilled and amazed at the quality of the musicianship as well as the production values (It's not overly produced, which killed Asia and later Yes albums). It MUSIC!

Thank you to everyone who loves this album, and especially to Gorrie and company for making it.

A quick follow up- I've exchanged correspondence with Mick Strode, who as some of you will have discovered yourselves was in a version of Band of Joy with Plant and Bonham. He lives in France, has recorded a bit over the years, and last I heard was working on a new recording that he says will be more like Forever More than the blues he's been doing off and on. He sounds like a very happy fellow and he was generous with his replies.