Wasn't that a mighty storm 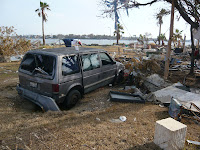 We traveled all around the sprawling city of Houston yesterday, and while there is the occasional home with a tree through the roof, the damage from Ike seems largely to be downed electrical wires, shingles and tiles blown off roofs, and the resulting water damage.

Things were different in Galveston. Seawater washed over much of the island, and while many of the island's structures were saved by the miraculous engineering structure of the sea wall, those buildings not protected by the wall were flooded at best, and washed away, at worst. 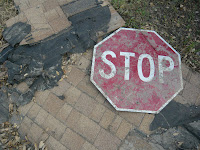 The west side of the island suffered most, but we also traveled to a neighborhood on the bay side (the side of the island facing the Texas mainland), and many of the homes were totally destroyed. These were older homes not built with first-floor-breakaway technique 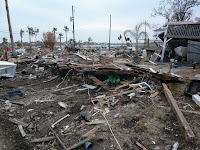 s, and they were swept from their foundations and largely torn apart.

I talked to a few of these homeowners, who lost everything, and they seemed to be in shock about returning to a lot empty of everything but the detritus of their lives, and the the strange 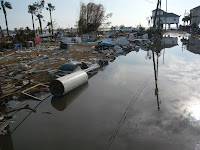 detritus of other people's lives. Most smiled and shrugged and admitted they didn't know what they would do until they talked to their insurance people, and to FEMA (Lord help them).

I can't upload photos from my hotel room for some reason. I'll put some up tomorrow when I get home.
Posted by Ed McKeon at 6:34 AM