Hey Rand, how'd you like to be Boss for awhile? 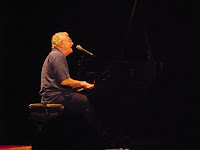 Listening, last night, to Randy Newman cruise through his, ahem, "hits," it was clear that seated before me on the stage of the Calvin Theater in Northampton, MA, was a major American talent.

As he said last night, his recent creative period has only produced six song in nine years, (or was it nine songs in six years), but those songs are undeniably original Randy Newman songs. The kind of songs that no one else could, or would write, and precious few could perform.

At 64, Newman's voice has neither mellowed gracefully, nor disintegrated. He can still barely wander outside of the narrow mid-range where his croak of a voice feels comfortable, and when he does, well, the results are unpredictable. But that is at the essence of his charm - to write perfectly singable songs that he doesn't really sing. It's not surprising that some of his songs are a bit more like a musical conversation than an aria.

He began with "It's Money That I Love," and didn't look back for half an hour as he explored his oeuvre, and acknowledged the smattering of applause at the start of well-known, well-polished and well-loved Newman classics like "Short People," and "Marie."

He sampled generously from his latest effort, "Harps and Angels," singing about potholes on memory lane, and warnings to the boys about when they lay you on the table.

Newman was having a bit of difficulty with the Steinway keyboard, or was it his fingers rebelling after a few nights on the road at joints like Carnegie Hall or Boston's Symphony Hall. At midpoint in "My Life Is Good" Newman's digits seemed to wander onto an errant chord and he announced, "Are there any doctors out there? I think I just had a small stroke." But his fingers wandered astray a half a dozen times during the evening leaving Newman to admit, in one of his last numbers, "God, I'm playing so shitty tonight."

It was a minor distraction in an evening where Newman's stories were as hilarious as ever, his songs, as simple and beautifully expressed as they are, served to skewer our notions of power, comfort and fame, or in a half dozen common words, tore to the heart of a complex emotion.

Towards the end of the show, he actually asked for requests. The room was suddenly alive with titles from throughout his career as he launched into "I Love LA." As he turned toward the keyboard for the first chords of "I Think It's Going To Rain Today," someone shouted out for the obscure, "My Little Buttercup," which Newman began to play. Then he lamented, "Aw, I've gone and ruined the mood," as he returned to the brilliant classic of loneliness and desperation.