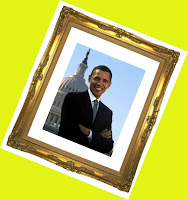 Another important essay about framing in the Presidential campaign. Turns out that George Lakoff is worried that the Obama campaign is moving in the wrong direction frame-wise, and conversely, the McCain campaign is defining itself through frames which touch Americans at a deep level.

As Lakoff suggests, when McCain calls himself a maverick, the last thing you want to do is say, "He's not a maverick." Because, while confronting him in a clearly negative way, you repeat his frame ("maverick") and that only reinforces it in the minds of voters. Instead, as Lakoff suggests, forget using the phrase "not a maverick," and use the frame "yes man."

Obama should be saying that McCain is "in with the Washington in-crowd," who use their influence to funnel power to those who are already rich and powerful.
Posted by Ed McKeon at 2:24 PM