Out of touch in little old Rhode Island 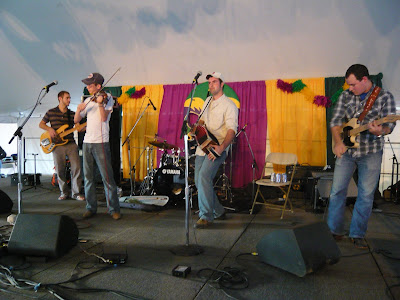 I know it's a dangerous assumption, but I assume that when I rent a summer cottage at the shore for hundreds of dollars, that along with TV/DVD/cable, one might expect an internet connect.

The Rhode Island shore is perversely behind-the-times. There are plenty of grown-up-like-topsy cottages, some on stilts, as if awaiting a glimpse of the hurricane which will eventually carry them into the waves, some pushing skyward for a glimpse of the ocean, or the great salt pond of Charlestown, past the bramble and saltmarshes, some hunkered-down, shingles sodden in the humid ocean air, for the long haul. Most of them filled with well-worn, second-hand sofas and appliances stalwartly braving the careless hands of vactioneers and wintering URI students. Folks smoke as if they've never heard the surgeon general's warning. They swill Bud Light, though Narragansett is making a brave comeback. And greeting each other in that loud, made-to-be-heard-above-a-foghorn, South County honk. "Grab me anuther bee-uh, would ya? And the hot sahwce too."

But try to find a wifi zone (outside of bohemian Wakefield), is like trying to find even a cheap knock-off of the Holy Grail. 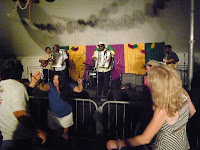 And yet the triumphant natural beauty, and the man-made, joie de vivre, all make it exotic and seductive. Maybe even addictive.

And so, I submit my absence on these internets to you. Awash in Rhode Island clam chowder, thick frappes, and loud, loud music from Louisiana (if you've been to Louisiana, you'll understand the affinity for that music here), I was happily disconnected for a few days.
This year's Rhythm and Roots Festival featured a number of familiar acts, and a few newcomers. The music was totally satisfying, often danceable, and frequently referencing the menacing Gustav, which was then heading for a dance on Poydras Street. 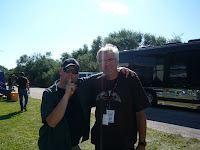 (Me and Kev Russell from the Gourds)

The festival site, which had been threatened by some civil action by the town of Charlestown, suddenly seems nearly out of jeopardy. The Pine Leaf boys have a new line-up, minus Cedric Watson (who is off "to do his own thing"). The Gourds were the highlight for me (though many others mentioned the Marcia Ball revue). And Saturday (gloomy) was less fun than Sunday (sunny and breezy), but by that time many of us didn't have the energy we began the weekend with.

NOTE: I forgot to mention in the earlier post that several of the Louisiana musicians left the festival early to try to beat Gustav to landfall. The Pine Leaf Boys, and the rhythm section of the Mamou Playboys left early to secure home and family against the impending hurricane. Thank God its impact was less than anticipated.
Posted by Ed McKeon at 2:07 PM