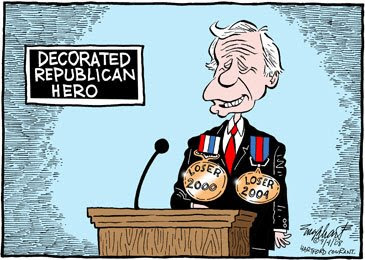 If you had just returned from a trip to the unconnected wilderness, you might think that Senator Creepy Joe™ Lieberman had departed this life from the treatment he got in the Hartford Courant this morning.

A front page eulogy from his former Democratic colleagues.

An editorial board rebuke.

An editorial cartoon by Englehart.

And dueling op-eds from Ned Lamont, and from Lieberman's former chief-of-staff, Bill Andresen, and current lobbyist for Dutko Worldwide (something the Courant fails to mention in its author credits).

BTW, the Washington Post also notes that Lieberman's days of majority influence may be coming to a close.

The Courant's front page piece reveals a resignation, by Washington insiders, that Lieberman's lycanthropy is complete.

The editorial piece is a late realization that Lieberman is not the man of honor the editorial board painted him as in their endorsement of him in the last Senate election, but a sore loser with an ax to grind.

Lamont's essay, is, as expected, an "I-told-you-so,' but his revelation that the Senator who once called Obama's presence a "blessing," seems to have abandoned that thought for no good reason but revenge on a Democratic party which doesn't care for the way Lieberman pisses on their pant leg.

Andresen, who, as a lobbyist, can't afford to criticize the "decent man" he used to work for, appears surprised that anyone could be angry with his former boss. He blames Lieberman's disaffection on (surprise!) "left-wing bloggers and a liberal, novice opponent," who just happened to point out that Sanctimonious Joe was a bundle of illogical contradictions.

Andresen dismisses internet journalism by saying "the anger and vitriol that too often characterize the politics of the online community have had much to do with the decline in civil political rhetoric. Because elected officials feel compelled to cater to one side, and its online echo chamber, they all too often say only what their online world wants to hear."

And I thought the alleged "decline in civil political rhetoric" began with the rise of conservatism, Newt Gingrich's divisive "contract with America" and the polarization of citizens by right-wing talk radio (Rush Limbaug). How naieve of me.

Andresen also says that the internet has been an ineffective political force, "Not only is this brand of politics shrill, it's also ineffective. As is almost always the case, the bloggers' candidate lost the general election in 2006, and Lieberman was re-elected by a substantial majority."

I don't know how Andresen can make such a sweeping statement, and I'd love to see his research to support his conclusion, but Bill, I've got one word for you, "macaca."

Sorry Bill that politicians don't like being called on their lies, indiscretions and predjudices by bloggers, but since journalists have abdicated that role, someone's got to do it.