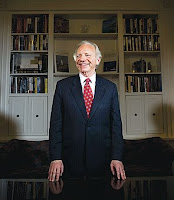 It's been reported that Connecticut's US Senator, Creepy Joe™ Lieberman received a "hero's welcome," on his return to the Senate, yesterday, from Republicans.

And despite the fact that he brags often about "crossing the aisle," it appears he was afraid to cross over to the Democratic side of the Senate floor on his return visit.