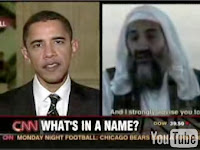 George Bush has spent the last seven years not pursuing Osama bin Laden. Now, in the waning days of his disastrous presidency, he has decided it's time to off the reclusive leader of al-Qaida.

So, despite the fact that he will jeopardize any cooperation with Pakistan's government in the hunt for terrorists, the drones are buzzing mountain villages, and dropping bombs on suspected hideouts.

The question, of course, is why now?

Could it be that Republicans think that killing Osama bin Laden would cripple the candidacy of Barack Obama? Obama has repeatedly accused Bush of taken his eye off of Osama bin Laden in his distraction in Iraq.

Could it be that in these last days of his fear-invoking administration, Bush no longer needs the boogie man of Osama bin Laden to wave in the faces of a fearful populace?

Could it be that the failure to kill or capture Osama bin Laden would forever stain even the trumped-up legacy of a worthless president?

After all, what's are the lives of a few innocent Pakistani mountain dwellers compared to the legacy of a strutting Texan.
Posted by Ed McKeon at 10:54 AM