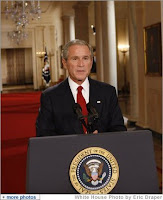 As I was running through the Charlotte Airport last night, I couldn't help but notice the unmistakable chimp-like mug of the leader of the Western world staring absently at the camera, lips flapping, as the words of an empty-headed speech ran in closed captions in the sports bars on the concourse. Most eyes were trained on the other screens, carrying late-season baseball. I didn't have time to catch more than a few lines, but I knew immediately that Bush was playing his trump card, fear, to frighten the American public, and intimidate lawmakers into joining him, lockstep, in one more preemptive strike into unfamiliar territory.

Upon arriving home and reading the text of his speech, I knew I was right.

Bush was providing a warning to the American public, but, like 9/11, it is coming months too late, and only after the disaster has happened. Large corporations aren't the only thing facing bankruptcy. The President is writing another bad check.

One could only imagine what another President might have said under the circumstances. What would FDR, JFK or even Ronald Reagan have said? A reality check for the American public is in order, but what the country doesn't need is the panic-inducing performance our current president delivered. What the country needs is truth, encouragement, direction and leadership. George Bush fails on all accounts. John McCain is now trading in similar theatrics. Obama is moving cautiously.

Where have you gone Joe Dimaggio?
Posted by Ed McKeon at 10:07 AM