The third circle of hell 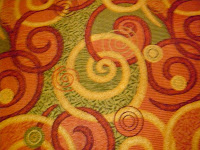 I was thinking of Dante's Inferno when I looked down at my feet at the Marriott in Houston at 11 pm where I had just arrived after a day in modern air travel hell. The rug pattern was spiraling circles, and it felt exactly like my day.

After the usual rushing around at home - getting the kids to school, packing, picking up the things at work I had forgotten to pack Friday, I made it to the airport with plenty of time to spare. I breezed through the TSA checkpoint, and even had time for some coffee. The first leg, to Philadelphia was uneventful, but once in the City of Brotherly Love, things changed.

Our US Air Flight left slightly late, and the pilot announced there was a half hour backup of planes waiting to take off. We were second to go, when the pilot came back on to announce that there was some indicator that things weren't right, so we were heading back to the gate to have maintenance check the situation. Another 45 minute wait. Then we were told the plane could not fly and we had to "deplane," but that we ought to wait in the gate area for news of another plane to carry us to Houston.

By the time I got to the gate, the line was mammoth, and moving slowly. After another 40 minutes, the flight agent announced that if Houston was our final destination we had to get to Gate 28 (we were at 18) for our only chance of getting to Houston today.

I ran to the gate, and the line was short, but the gate agent there was angry at the intrusion of a hundred last minute travelers.

"You don't exist," he told me as he punched futilely at his keyboard (Why are airline systems so hopelessly complicated?) "You've got to go to customer service."

Another run down another concourse, and of course, another line. The Customer Service counter was a parody. The agents sauntered and yawned, left on breaks and to welcome other flights at other gates. I was in furious conversation with my travel agent (Sanditz Travel and Karen Renehan in Middletown - the best and most helpful travel agent ever), who got me booked on a Continental flight at 5:30, but I had to convince the US Air customer service agent that US Air would pay for the flight. She was easily convinced, but I should have been suspicious.

We rushed the entire length of two concourses, waited for Continental gate agents to show up only to find that the US Air agent had screwed up. We were indeed listed on the flight, but US Air had failed to notify Continental that we were an official transfer. After a long and frustrating conversation with the US Air agent, the Continental agent told us we had to go back to the other concourse (a fifteen minute walk), and get a paper ticket from US Air, that could be transferred to Continental. At this point, the Continental flight was just about to board. I asked if I could purchase a ticket for the flight, and when told I could, I did.

Once we got on the Continental flight, it was delayed an hour on the runway. We arrived after a long, cramped, crowded three hour flight (with meal service, however), to find that our camera equipment had not made it onto "the next flight" as US Air promised, but would probably be in the next day (hopefully before noon).

To end the day, the hotel gave me a non-operable key, and it was a long walk from the check-in desk.

Today we face horrendous post-hurricane Houston traffic, humidity, 90 degree weather and clouds of mosquitoes as we survey hurricane damage for a Connecticut insurance company.
Posted by Ed McKeon at 6:01 AM

Sorry to hear about your visit to hell. I've been there. It sucks.

When it comes to air travel, I don't care how much extra it costs, I always book a non-stop. That way, the very worst that will happen if your flight gets messed up is you go back home. There's nothing more annoying than being stuck in a strange airport in a strange city.

I'll even drive to the NYC airports to procure my non-stop flights. It's THAT worth it!