Some of those community organizers Republicans think are so funny

Republicans at their National Convention, led on by cheerleading Vice Presidential candidate Sarah Palin, have held community organizers up for ridicule.

With that in mind, it's important to consider some community organizers who have experienced derision from the establishment in the past, but who went on to make changes in the world. 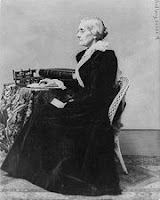 A man named Mohandas Gandhi organized the men and women in his country to stand against the injustices of British imperialistic occupation.

A woman named Prudence Crandall organized a school, and created the first integrated classroom in the United States.

A man named Thomas Paine inspired colonists to rebel against Britain, and named this country the United States of America. (Yeah, all he did was write a couple of books - one, Common Sense, was a bestseller).

And of course, thousands of nameless, and unthanked community organizers have helped the underserved, and overlooked to achieve justice, healthcare, nutrition, education and social status. These organizers don't often achieve the notoriety, or huge monetary rewards of political or corporate leaders, but their contributions are not something to be laughed at.
Posted by Ed McKeon at 1:55 PM