Brewin' up with Paul 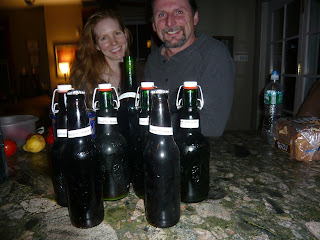 I've known Paul Rousseau for years. He showed impeccable taste when he produced a folk concert series at the Art Guild of Farmington for a few years, bringing people like Fred Eaglesmith and Micheal Fracasso to appreciative audiences.

He's an impassioned environmentalist, an amazing cook, a spiritual voyager, a practical philosopher, a wide-ranging conversationalist, a spirited lefty and a scratch carpenter. Paul enjoys life.

And in the past few years, he has discovered a new passion, and turned it into yet another skill - brewing beer.

I've been invited to sip more than a few homebrews, and I've suppressed winces, and gulped politely and have issued tactful reactions like, "Mmm. That's interesting." So, when Paul dropped off a few bottles of his homebrew, I expected the worst.

I was happily surprised. The beer was good, very good. It was complex and tasty and the match for many of the microbrews I've enjoyed, and the superior to many more.

So when Paul called to bring another batch of sample bottles to the house for a night of "tasting" and conversation, I arranged a date without hesitation.

Last night Paul and Jess arrived with a small cooler, filled with brown bottles labelled with names like, "Beam me up, Scotch Ale" and "Robin Hood Bitter" and "Cherry Poppin' Girly Beer" and "New Moon Pharm Ale" and "Red Whip Belgian Wit" and "Three Amigos Chereza Stout." The names all come with a story, and as we worked our way through the wonderful beers, the names were explained, the ingredients revealed, the effect on the palate metaphorically described, and the Republican candidates for president and vice-president lambasted.

The evening ended with a counter filled with empty bottles, and my plan to walk to Earth House to hear Megafaun suddenly seemed foolish and difficult. After Paul and Jess left, I walked unsteadily up the stairway, and fell into an immediate, and sated slumber.

I've got an appointment to help Paul make a batch for him and for me, in a few weeks, and I'm already wondering what to call the batch of double ale IPA.
Posted by Ed McKeon at 11:00 AM