Vicevich found with his foot in his mouth 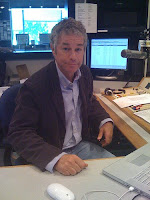 I haven't listened to right-wing hatemonger Jim Vicevich on WTIC-AM for months. Mostly it's because I don't allow myself to listen. Partly, it's because I haven't been in my car much over that time period.

But yesterday I was in my car and the radio was tuned to WTIC-AM.

And I was just about to switch the damn thing off because the blowhard host, and his blowhard guest from some wingnut blog called Powerline were jerking each other off about ACORN and how the Obama campaign has collected internet donations. The entire conversation was accusation with out substantiation. Typical.

Then a call came in. The caller introduced himself as a veteran. And as usual, Vicevich afforded him the deference he offers all people who have participated in military service.

I don't know the caller's exact words, but he said something like: "I'm a Vietnam veteran, and I just wanted to call and comment on what you had to say about homeless people being allowed to vote."

A few minutes earlier, the dimwitted host, and another caller went on and on about how allowing homeless people to vote would lead to massive voter fraud. In a mocking voice, the nitwit host did his imitiation of a homeless person saying something like, "My address? It's bench 939 in Central Park." And then the host and the caller laughed like hyenas.

So, the Vietnam vet was commenting on that exchange. He continued by saying something like: "I'm not an Obama supporter, but I don't see how you can be against homeless people voting. Lots of Vietnam vets are homeless. They live under bridges and in the woods, and they served this country. And I think they have the right to vote."

The lamebrained host said, "But...." and then there was a moment of what radio people call "dead air."

The host, whose tongue was suddenly as calcified as his intellect, changed the topic rapidly, but in that moment, that one moment, the host's hate, derision, predjudices, biases, and blindspots were suddenly distilled and exposed by the simple challenge of a Vietnam vet.