If he's such a good campaigner, why can't he deliver his own state? 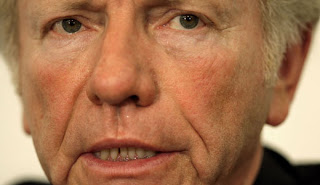 Much was written yesterday about an interview Creepy Joe™ Lieberman did Friday in which he exclaimed about Bush-in-skirts Sarah Palin, "Thank God she's not going to have to be President from day one." In fact, if you read the interview in context, his "Thank God," clearly refers to the presumed health of his buddy John McCain.

What's more striking about the interview was his irritation when reporters asked him about McCain's negative campaigning. According to Hartford Courant reporters, he said:

"You guys are going down a road, you have contributed to the demeaning of our politics by this kind of focus," Lieberman said. "I mean, give me a break. Have any of you been out listening to me?"

That's Lieberman blaming the messenger for his own divisiveness.

Also, according to the Courant: "Lieberman said he has refrained from using a McCain campaign label for Obama's call for higher taxes on the wealthy — 'socialism.'"

Unfortunately, as noted in this blog a few days ago, that's simply not true. Lieberman stands on the same dais as everyone in the right-wing campaign who is furiously spewing McCarthyite claims of "socialism," "Marxism" and "Communism," in hopes of frightening a handful of American dimwits into believing that Obama is one of "them."

Here's what Lieberman himself said the other day in New Hampshire:

"I mean there's ways I suppose you can make the argument that there's some similarities between with what Senator Obama is talking about, a classic what used to be known as socialist theory. I just think you have to state it directly: Senator Obama wants to raise taxes and Senator McCain does not."

So much for his claims of innocence.

And if you want an indication of whom he's aligning himself with check these out.

From a right-wing Florida newscaster:

My question to Creepy Joe™ Lieberman is, why not come to your own home state and try to sling some of this shit? Afraid of how the crowds might react to ridiculous red-baiting?
Posted by Ed McKeon at 7:33 AM

Don't count on Joe stopping by to share his blather on McCain.

Most of Joe's public appearances during and after 06 in CT, campaigning or not, have been limited and unannounced.

Hearing his own constituents would give him a another jolt of just how out of touch he is with a growing number of residents and not just his former liberal base.