A frightening bit of logic on the possibility of bombing Iran 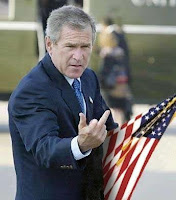 If we think the Bush administration has done its worst (Iraq, the economy, loss of civil liberties), then we might be rolling up the hose before the fire is out.

I ran across this frightening bit of analysis written by financial analyst David Fink, which postures that George Bush, and the members of his administration, have several good reasons for bombing Iran before an Obama administration, and a Democratic congress, can take office.

This too, Nancy Pelosi, and Harry Reid, the reason that George Bush should have been impeached and driven from office.
Posted by Ed McKeon at 9:29 AM

If Bush invades Iran at any point after Obama wins, it'll be torches and pitchforks outside the White House for sure!