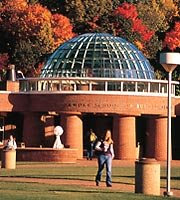 Quinnipiac is a strangely common native American word that regularly falls out of the mouth's of pundit and newscasters during this election season.

Over the past 20 years, Quinnipiac University has reinvented itself from a sleepy second tier college to a respected school with major concentrations in law and communications.

But there must be something the school doesn't understand about the Constituition, and the New York Times calls them out on that lack of perspective today.

It seems Quinnipiac is trying to ban some student journalist from printing an independent newspaper on campus.

I wonder where their vaunted journalism professors are when this repression is going on? Where's the story in the "new" Hartford Courant? Where is the good sense of the administrators?
Posted by Ed McKeon at 6:54 AM