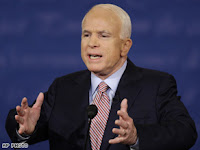 Strange, strange, strange that Cranky Old John McCain made it through an entire debate without referencing his young counterpart who has been poison the well of American politics.

For my money, McCain stumbled, bumbled and rambled his way out of the presidency tonight.

To be honest, Obama didn't mention Biden, but he hasn't sent Biden on the road to stir up mob hatred of McCain.

BTW, McCain did mention Creepy Joe™ Lieberman three times. Who is he really pining for?
Posted by Ed McKeon at 11:36 PM