Down to the crossroads

Many years ago while travelling South of Memphis, I stood at the famous crossroads of the Robert Johnson legend in which he sold his soul to the devil to become a genius blues player. That crossroads, of highways 61 and 49, in Clarksdale, is only one of two possible sites for that satanic meeting. The other is the crossroads of routes 1 and 8 in Rosedale Mississippi. Of course, it's all just legend, as is much of what's known of the short life of Robert Johnson. He died at 26 or 27 after travelling the country, making a reputation for himself as an incredible musician, and recording a very tiny but influential set of songs. 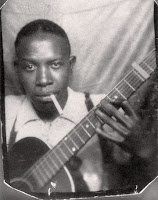 The legend continues, and is expanded in a compelling story of a newly-found photograph (on EBAY of all places), written by Frank Digiacomo and appearing in this month's Vanity Fair.