And the politicians are gleeful

I never purchased a GE light bulb because Jack Welch had reputation as such a brilliant CEO (though the truth of his brilliance is exaggerated). Nor did I buy a Tyson chicken because Don Tyson ran such a good company. Or use a Citi card because Sandy Weill was supposed to be such a financial genius.

It's rare that anyone would buy a product because of a CEO. The rare exceptions might be food products like Newman's Own or Ben and Jerry's, or new technology products like Apple, or Facebook. And even in those cases, the product needs to be superior or it isn't purchased. It's just that in those cases, the CEO is founder, inventor, chef and is still intimately involved with the products which are produced in their companies.

So, when layoffs come. Why doesn't anyone consider lopping off the CEO, and all his or her useless minions first?

Same goes for newspapers. The Hartford Courant is bleeding cash. So the CEO and the publisher fire reporters, photographers, editors and staff. The people producing the product. In the case of the Courant, the most expendable individuals are the CEO, the publisher and the layers of useless administration, who will eventually disappear when there aren't enough writers left to provide copy to surround the advertising. 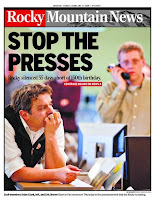 The Rocky Mountain News is publishing it's last issue today after being in business for 159 years.

And the only ones happy about newspapers disappearing are the politicians. Think of what the legislators in the state will get away with without Mark Pazniokas looking over their shoulders. Think of what Dodd and Lieberman will do to the state, and for themselves without Jesse Hamilton keeping an eye out. And don't count on TV reporters to do any of the heavy lifting.

It's a triumph for political power and corruption while it's an indictment of corporate ownership, and failed business practices.

E.W. Scripps, the erstwhile owner of the RM News, is a $2.5 billion media company that counts among its properties 19 newspapers, 10 TV stations, several cable networks, and the syndication company United Media. These are people who don't own newspapers because they love the rhythm of a good story or the smell of newsprint. For good or bad, they are business people.

All of the Scripps papers are bleeding serious ad revenue, and if it weren't for the $26 million they pulled in from political ads last year, the same would be true of its TV outlets. Throw in a little misguided management and now we're talking serious money.

RM News was their biggest paper, so it goes without saying it is their biggest looser - the paper dropped $16 million last year. Not unreasonable, then, that it's the one to take the hit.

The real question is, how did we get here? Thanks to the Friedman-esque leanings of our federal leaders (Dems and Repubs alike), we are paying the price for the assumption that the market is smart and self-adjusting. The 1997 Telecom Act paved the way for Scripps and others to build their empires. A federal act, by the way, that was brought to you by the very people who again hold in their handsthe economic reins of this country.

Mike is right the debt added to buy other papers and tv stations then the dropp-off and subs due to the internet and now the recesion or depresion will cause many more papers to stop the presses. The Chronicle in SF will probally be next.