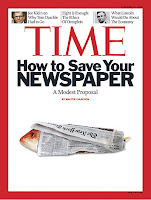 I've spewed my share of electronic words here about the way in which a combination of forces - corporate ownership, financial constraints, an aging readership, competition from electronic media - have pushed newspapers to, and over the brink.

As a c0-founder of a local newsblog (The Middletown Eye), I'm acutely aware of the failure of the legacy media, and the difficult, if not impossible task, of filling the gap with volunteer community journalists.

I bridle at the accusations, hurled by media analysts, that the news can only be delivered by trained journalists, and that the resulting loss of "objectivity," depth and grasp of the "truth" will doom us to a hobbled democracy.

In fact, objectivity and the truth are slippery concepts which reporters and editors have rarely grasped firmly.

Certainly, "untrained" reporters ought to be aware of the difference between reporting news, and opinion. They should understand that checking facts, and having two (ideally three) sources before printing a fact, is the time-honored path to approaching the "truth." They should know that the facts will save them, and having those facts reported accurately in a notebook and on tape are the way to protect them from accusations of inaccuracy, libel and slander. They should know that there are at least two sides to every story. Reporters should be aware that sophisticated sources will try to spin them, and unsophisticated sources may be so lost in a passionate argument that accuracy falls by the wayside.

Unfortunately, if those rules were followed by the legacy media, we might not be in this mess.

The New York Times bought into the administration selling points prior to the Iraq war. The White House Press was cowed into allowing the Bush administration to lie for eight years. Here at home The Hartford Courant the editorial board endorsed Joe Lieberman, John Rowland and Eddie Perez, even as intrepid reporters were working to reveal the vile political manipulations of these politicians. In my hometown, which the Courant has abandoned, the Middletown Press doesn't even have the horses to cover the basic stories.

All this, to point you to one of the best essays I've read recently on the topic.

In a truly thought-provoking Salon essay, Gary Kamiya posits that it's not only the death of newspapers we should worry about, but the death of reporting.

We need to remember that our founding fathers understood the importance of a free press to a well-regulated democracy. At its most desperate juncture, our local state paper, The Hartford Courant, is focusing a microscope on crooked politicians, venal appointees and incompetent corporations.

We can't afford to lose that microscope, even if all it reveals are the viruses which are making our communities sick.
Posted by Ed McKeon at 11:01 AM

I went overboard yesterday to expose the perfidy of Diane Rehm’s 2/16 show, “Update on Afganistan”, that was comprised of a panel on two beltway insider reporters and two off-the-shelf Pentagon spokespersons.

I spent over 30 minutes discussing the Board of Directors of the two institutes. You can find them here:

It does seem as if every reporter is just looking to get the experience to attain a lucrative PR job.

Just keep up the good work as long as you can!