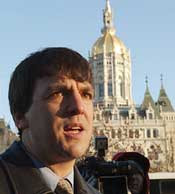 The legacy press can call Ken Krayeske anything it wants. That's freedom of the press, and now Ken Krayeske is a very public figure and open to such criticism.

But, it's turning out, Ken Krayeske is brilliant in his own way. The Jim Calhoun salary debate is now a public story. The Hartford Courant printed no less than three pieces on it today (a front page tickle, a story by Matthew Kaufman and a column by Rick Green). And that's just the Hartford Courant. The story is all over the country. The blame for that lies with Calhoun, not Krayeske.

But I want to cite Roger Catlin, of the Hartford Courant, who, in his blogs agrees that the post-game sports news conference is, indeed, an appropriate place for the question of salary to be raised. While many other journalists have called Krayeske out-of-bounds, Catlin has rightfully come to his defense. By and large it appears that the sports reporters on the inside circle for UCONN men's basketball show as much deference to Jim Calhoun as the White House press corps showed to George Bush.
Posted by Ed McKeon at 6:09 AM

You can say that again, Ed. Spot on.