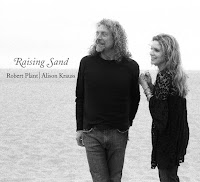 Folk music was the big surprise winner at the Grammy's on Sunday.

Pete Seeger won another Grammy. This time for Pete Seeger at 89 on Appleseed.

Art Rosenbaum and Dust-to-Digital won a Grammy for the first volume of The Art of Field Recording.

As mentioned in another post, Michael Doucet and Beausoleil won a Grammy, as did the Five Blind Boys of Alabama, Bela Fleck and Dr. John.
Posted by Ed McKeon at 7:56 AM

Cool! Alison now has 26 total Grammys. A boatload more than any other female artist...and only Quincy Jones has won more Grammys than any artist in music history (exactly one more = for a total of 27.) I suspect Alison will lead the pack soon enough. It doesn't seem that long ago we watched her as a young competition fiddler, and later in the Kentucky Fried Chicken Bluegrass Band Contest in Louisville, KY. Alison played fiddle and sang one song with a new group called "Union Station". Oh yeah...they won.