Another rendition of "Hail to the Chief" 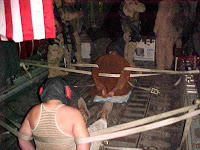 I'm not expecting to agree with everything the new president does, but his failure to put an end to extraordinary rendition dulls the shine on his restoration of other Constitutional rights.

I can't see how someone who seems to understand the need for the United States to adhere to the letter of the law can allow a policy which allows secret U.S. agencies to kidnap people from the streets, anywhere in the world, and throw them into jails without the benefits or personal freedoms, or guaranteed representation and due process.

It's a shameful sin of omission in Obama's current attempts to resurrect the reputation of America, and restore the rights we are all guaranteed by the Constitution.

An Obama spokesman said: "Obviously you need to preserve some tools – you still have to go after the bad guys."

Sorry, but I'm not willing to allow any administration to define who the bad guy is, if the bad guy doesn't have the right to declare that a mistake may have been made.
Posted by Ed McKeon at 9:58 AM

As has been happening a lot, it looks like the claim of Obama continuing a bad Bush policy has been exaggerated.