Has the New York Times fallen for a Cajun joke? 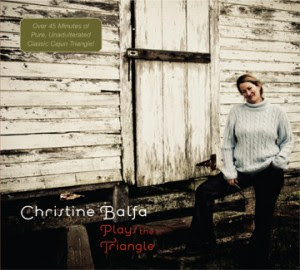 But I think he's fallen for an outsized Cajun joke.

Joel Savoy, proprietor of Valcour records, released an album by Christine Balfa late last year. It is, and was, Christine playing solo "tit fer" (little iron) or triangle. It's the tink-a-tink, without the chank-a-chank. As you can imagine, the album is repetitive in a way the way that only a triangle can be moving from waltz to two-step without accompaniment. Of course there's the occasional Cajun wail, but it's triangle most of the time.

And it's a joke. I know because I corresponded with Savoy about the album.

Not surprising from Savoy, or Balfa, who are both excellent musicians. Balfa, also a guitarist, is the daughter of Dewey Balfa, the late, legendary Cajun fiddler. Savoy was a member of the Red Stick Ramblers, and is a talented multi-instrumentalist, and the son of famed Cajun musicians, Mark and Ann Savoy. Both like a good laugh, especially when the joke is on city slickers.

So, Pareles has raised the Balfa album to high art, and maybe he's in on the joke. Surely the proof will be in the pudding as we keep an eye on sales of the Balfa album to see how many music fans will buy a concept unheard, because it was praised in the Times.

And they're even smirking at the Valcour site.
Posted by Ed McKeon at 7:54 AM