It's clear, from any reasonable point-of-view, that the Republican choice of Sarah Palin as John McCain's running mate, is at once ridiculous and brilliant.

Palin is a shallow, bullying Jesus freak who doesn't believe in evolution, global warming or conservation. She ran as a fiscal conservative, then ran up the tax bills in the town where she was mayor. She declared herself a maverick, and hired a lobbyist to capture a feast of earmarks for her little town. She preached abstinence, but couldn't convince her daughter. She ran as a corruption buster then harrangued her public safety director, eventually firing him when he refused to execute a family vendetta against Palin's former brother-in-law. And she supported the Bridge to Nowhere before she didn't.

But none of that matters. Because as Paul Lakoff has pointed out, the choice of Palin is a metaphorical coup. Palin is the strong, authoritative, but loving mother in the Republican dream of an orderly family. She is the protectoress, who will work tirelessly to provide for that family. She shoots guns, and eats red meat. And she is a border crosser, a maverick, moving from the wilderness, to the nation's capitol, to unleash her wrath on big government. She loves her Jesus, and she prays for all of us.

She is a right-wing wet dream. She's stacked and she's packing (as a good friend described her to me).

Those of us who don't buy into the metaphor, must do our best to dispel the fairy tale, through the kind of framing. Obama as nurturer, and healer. Obama as outsider, and agent of change. At the same time Palin, and McCain, must be called for what they are - extremists, and a divisive force which will continue to divide this country in a method more destructive than even George Bush could muster.

Laughable as that statement is, Republicans have learned the power of repetition. She was only the mayor of a tiny Alaskan town of 7,000, and governor for a year and a half. She's an intellectual lightweight, a Bizarro-world anti-feminist, a vessel for a God for who the war in Iraq is a sacred mission. 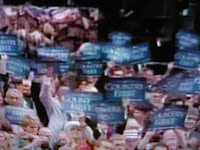 By the way, don't those Country First signs remind you of the in-store supermarket brand of cheap canned corn and slightly weird-tasting catsup?
Posted by Ed McKeon at 5:56 AM

To add fuel to this fire about John McCain and his desertion from the alternative energy issue, I suggest reading this column by Thomas Friedman - Paste this link into your browser.
www.nytimes.com/2008/09/03/opinion/03friedman.html?_r=1&hp&oref=slogin