The Hartford Courant, a bad haircut 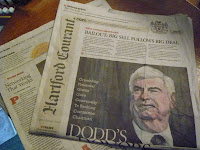 I heard Courant managing editor, Barbara Roessner on the radio this morning, and as she recited the reasons why the Courant has redesigned it's print edition (the world is changing, competition for breaking news with the internet, readers with less time), she seemed a little jaded, maybe even bored - as if she'd recited this list several times over the past couple of weeks, and didn't quite believe it herself anymore. (She didn't mention Sam Zell once.)

Roessner, who in managing the redesign, has responded dutifully to a hopeless and thankless task. But she used the words "taut" and "dense" to describe the redesigned daily.

I think the words I would use are "garish" and "shallow."

I still can't understand why a newspaper would redesign itself so that people like me, longtime subscribers, who like to read a substantial paper, would feel disappointed and alienated. At the same time, the Courant seems to be appealing more to a younger, internet reader who will never approach an honor box, a newstand, or god forbid, fill in a subscription application. Maybe I should simply go each day where the print edition seems to point me - to the internet version of the paper.

I was really interested in reading the front-page story about Chris Dodd, but I found it strangely difficult to make my way through. Do I really want some sub-head writer telling me every three paragraphs what I'm about to read?

As for the front page illustration of Dodd (there he is in all his impressionistic triple-chinned glory), I can't imagine it will sell many papers. If it's front-page, magazine appeal, the Courant is going to have to go with someone like Hillary Duff, and forget the senior Senator from our state. And Lord help us then.

I've said in a previous post that the Reader Speak headlines seem to pander to the kind of online readership which consists of lurkers, looking to spew some anonymously vile epithet. A thoughtful reader comment, will not necessarily be expressed as a single-sentence reflection. So what we'll get is neither the ugly insult, nor the considered opinion, but something in between - a short, tedious, pedestrian, anonymous blurb like "His character was in contrast to the selfishness that is so common today, and which has cause our economic situation." So, who the hell cares, except the person being quoted.

As for news, or lack thereof, it's already obvious that there will be less of it all way round. Less international, less national, less local. And what we do get will be condensed, digested and served in an easy-to-read fashion. I spent 20 minutes with the Sunday Courant. Less time with today's. I've got time on my hands that I'll spend at HuffingtonPost, nytimes.com and Salon.

While there's precious little in the way of story on the front page (3 by my count), page 2 and 3 actually begin to look like a newspaper worth reading. But from pages 4-9, where, based on a four-column model, there appears to be 480 column inches, there are, in fact, about 72 inches of news copy, and a whopping 408 inches of advertisements. That should make the ad department very happy, if the surfeit of ads doesn't drive circulation down.

Oddly, the copy-heavy ad for the Amish no-flue fireplace mantle, in Sunday's Courant, was almost as interesting a read as any of the stories in that section (and greater in depth).

The rest of the paper is just as distressing - the lack of distinguishable state and town section, the appearance of classifieds on page 2 of the CTLIVING section, the constant reference to things not in the paper but on the web (does anyone really believe that someone moves easily from a printed reference, to an internet site?), an editorial page diminished by half, and a lot of news written by non-state residents.

Coincidentally, my subscriber invoice arrived in the mail the day before the "new" Courant hit my doorstep. Before I mail it in, I want to be sure that these first few days are not an indication where the paper will end up.

Maybe, like a bad haircut, it will grow out.

Here's my suggestion. All Courant writers and editors, grab your clippings and leave your desks now. Rendez-vous at the Red Rock. Write a declaration of independence in the form of a business plan. Put up a couple grand apiece and start a new Connecticut online news site. Beat the new Courant at its own game. There are stories to be written. Ads to be sold. Pocket the money that's going to Zell.
Posted by Ed McKeon at 10:05 AM

I have to say that after so many disappointing newspaper amputations-gone-wrong, I haven't even tried the "new and improved" Courant. It would be less painful if they just went out of business.

Ed- I have been bitching about this since Sunday to anyone who will listen! I feel your courant pain...

First off, thank you very much for bringing this to attention. Bobby Roessner is an idiot and a moron. Her and Zell have been in kahoots from the start. Zell doesnt care about journalism, he cares about money. And bobby is a fantastic example of how an idiont in power can destroy something beautiful. Kinda of how Bush destroyed America. Roessner is like a male Bush, or possibly an even dumber Sarah Palin. But let me just say the Courant stood from something way more than a CT newspaper. It was a world leader in newspaper photojournalism, a world leader in design, and a world leader in print journalism alone. Today, ladies and gentleman the Courant is a laughing joke worldwide. No longer will we compete with LA and NY times. No from now one we will be laughed. The oldest continuously published newspaper is now the oldest continuously published joke. Thanks Bobby Roessner you are so smart.