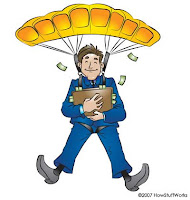 Everyone knows that there are no copyright notices on good ideas, and that good ideas are often not original. And Lord knows, I'm not accusing anyone at the New York Times of reading this blog.

But a week ago, I suggested that executive bonuses be put in escrow to guard against taking money in good times as they take risks which eventually destroy the business that makes them rich.

One way to change this would be for banks to hold a big chunk of bankers’ pay in escrow, to be doled out over several years. A bigger share of a bankers’ pay could be made in restricted stock that can only be sold over a fairly long period of time. Golden parachutes could depend on good performance through the executive’s tenure.

Why, thanks for saying so.