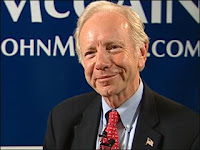 Connecticut Senator Creepy Joe™ Lieberman claimed in his Judas address at the Republican National Campaign that Barack Obama "is a gifted and eloquent young man who can do great things for our country in the years ahead, but my friends, eloquence is no substitute for a record — not in these tough times for America."

Insulting enough that the former Democrat would dismiss his colleague's record, and his readiness to be President so readily, but now this.

While in Seattle, at a wedding (avoiding Connecticut at all costs), Creepy Joe™, completed the slur by indicating that Republican Vice Presidential candidate, Bush-in-a-skirt, Sarah Palin "will be ready. She's a strong, confident, smart person who has had some executive experience."

For chrissakes Joe, just how stupid do you think we are?

BTW, Creepy Joe™ can't seem to get over the fact that bloggers, protected by the First Amendment, who helped him lose the Democratic party, his party affiliation, and the unconditional support of Connecticut state Democrats.

I think we call that progress, Joe. And my thanks to Dailykos, Myleftnutmeg, CTBob, Firedoglake and all the other bloggers who made your irritation possible.
Posted by Ed McKeon at 11:17 AM