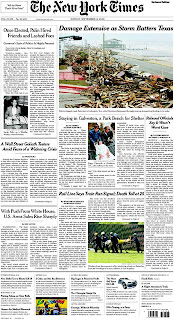 I stopped into Central News this morning for the Sunday morning ritual of picking up the New York Times, and allowing Dom to lavish sweets on my boys.

Billy greeted me at the door.

"We didn't get the papers today, Eddie," he said gravely. "The Koppelman guy didn't show up, and he's very reliable."

The HP Koppelman Company distributes newspapers throughout central Connecticut, and the very reliable delivery agent hadn't checked into headquarters, and hadn't made deliveries anywhere in town.

After a cup of coffee, and a bagel at Brewbakers with Paul, Sowgol and Nadine, I returned to Central News and Billy said, "They're not coming today. We're closing early."

And so, I'll be forced to read the New York Times online today. And already, there's some essential reading.

A front-page story which delivers the facts about Sarah Palin's vindictive, corrupt, cronyistic tenure as mayor of Wasilla and governor of Alaska.

A revealing editorial by Frank Rich about the real strategy behind the McCain-Palin ticket.

And while I'm at it, may I recommend a few columns from the opinion section of the Hartford Courant this morning.

And the Al Hubbard's and Norm Neusner's disturbing account of Chris Dodd's failure to recognize the emerging dilemma at Fannie Mae and Freddie Mac when something could have been done to stem the crisis.

The news matches the day. Gloomy.
Posted by Ed McKeon at 10:23 AM

That is gloomy! Turn that frown upside down, put on a happy face. Everytime it rains it pours pennies from heaven...Look on the sunny side!

At 6:10 today (September 24, 2010), I stopped into Mobil on the Run in Guilford to pick up the New Haven Register, USA Today and the Wall Street Journal. As is often the case, Koppleman AGAIN failed to get there and deliver the USA Today and Wall Street Journal. Being fed up with this inefficiency, I decided to call the Koppleman company and see if anything could be done and then start a petition in Guilford if necessary.