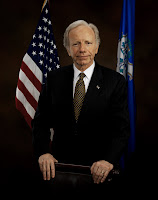 Today I temporarily drop the Creepy Joe trademark with which I have taunted Connecticut Senator Joe Lieberman for months.

Lieberman meets with Senator leader Harry Reid, and a likely outcome is that Lieberman will lose his seniority and committee chairmanships in the Senate. Maybe you think that hurts Lieberman, and Lieberman alone. It doesn't, it hurts Connecticut.

Never mind that Lieberman has betrayed his party and his ideals, he has abandoned the very people he was elected to represent.

Many of us understood that he was duping the least suspecting, most trusting among us when he dumped his Democratic affiliation and ran against Ned Lamont as an independent. He told us that he was better equipped to represent the people of Connecticut because of his experience, and influence in the Senate.

Yet he gambled that influence and the weight of that experience on a all-chips wager that John McCain would become president. His vituperative invective on the campaign trail put the final bricks in the wall between Lieberman and his Democratic colleagues. As late as yesterday he warned a conservative talk show host about what he called the frightening power of a filibuster-proof Democratic majority in the Senate.

We have to imagine that with talk like that he never planned to caucus with the Democrats after his campaign run with McCain.

And because he's abandoned the power he would have had this session as a Democratic Senator, he loses the ability to influence decision making with the majority. No longer will he be the deal-breaking 50th vote. No longer can he negotiate with others because he has some influence on a powerful committee.

We may as well have a freshman Senator with a minority party in the Senate. That's how much influence Lieberman will have. And probably substantially less since he's worked so hard to alienate his colleagues.

Think of how much more influence we would have today if Ned Lamont was occupying a seat in the Senate.

In my mind, it's grounds to ask for his resignation. He isn't the man he said he was when he last campaigned for election. He doesn't represent the party he claimed he was affiliated. And he's lost the power to influence decisions for the people of Connecticut.

He will be a lame-duck Senator for the next for years, and we're stuck with him.

So, Joe, if you have a decent bone left in that back of yours, do us a favor and resign.
Posted by Ed McKeon at 10:54 AM