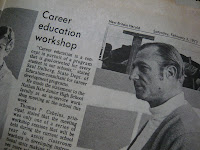 I love newspapers. I'm of the age when saying so requires little explanation.

I grew up in a home where my father consumed three newspapers a day. A local morning paper (The Hartford Courant), a local afternoon paper (The New Britain Herald), and a national or regional paper (The Daily News, or the Boston Globe).

I picked up the reading habit early.

I delivered newspapers starting when I was 10. First, it was a wide-ranging route through New Britain, for the sparsely-subscribed-to Hartford Times. Then for five years I peddled the New Britain Herald to nearly every house on a long block of Winthrop Street in New Britain (where many of the houses and apartment buildings have disappeared, and medical buildings are now in abundance). Every day, after the route, I'd sit in front of Marty's, one of those now extinct neighborhood groceries, and, sipping a cold Coke, I'd skim the headlines before I consumed the comics.

I wrote for my high school newspaper, for my college newspaper and when I graduated during a recession with a master's degree in English literature, I worked for a few years as a stringer for The Hartford Times, which, for most of the months of my employ, was breathing with a death rattle. It succumbed shortly after they informed me that my services were no longer needed. Later on I wrote a music column for the New Britain Herald for ten years.

So when I read this morning about the impending demise of the Herald (of New Britain - a mast head, now laughable in its desperate attempt to be a regional, and not a city paper), and the Bristol Press, I feel a melancholy that's laced with worry about what's to become of local news.

We all know that our "state" paper, the Hartford Courant, has all but abandoned local reporting. And because local reporters are so overburdened with a focus spread over several towns, and because they don't often live and work in the towns they cover, they don't, and can't, always get the "whole" story, or they don't get the story right (sometimes not getting the whole story is, in itself, a failure to get the story right).

And we surely can't leave local reporting to the "media," those well-coiffed TV reporters, and the less-than-well-dressed radio reporters clutching MP3 recorders, who breeze in and out of meetings, grabbing a sound bite that may or may not reflect the reality of what happened over the course of an entire lenghthy municipal meeting, feeding incomplete thoughts over satellite feeds, and internet links to an audience who could care less. Besides, the media only shows up for controversy, not for the day-to-day decisions by which every town runs.

Sure, papers come and go. Unfortunately, these days they go far more frequently than they come.

No use spending too much time contemplating what killed newspapers, and while TV, radio and the internet have been accomplices, I think it's widely known that business, finance, the free market and capitalism are the chief murderers.

Because even today, when you can find much of the news you need elsewhere, newspapers which are well-written, locally-owned, staffed with knowledgeable reporters and editors, can be and are successful. It's the widespread practice of buying and selling newspapers to conglomerates and chains which has sucked the life out of so many dailies. Paying back the debt for outlandish purchases of well-circulated papers means an inevitable death.

Look at the Herald and the Bristol Press. They were bought by a chain which pared staff, cut editorial inches, filled space with stories generated elsewhere, until readers stopped subscribing, stopped pumping quarters into honor boxes, stopped reading because there was little worth reading. The Hartford Courant beware. And now the Journal Register's stock is hovering at 1 cent a share. The Journal Register is successful at one thing, incompetence.

The press is one of the few trades name-checked in the U.S. Constitution. It is the only trade name-checked honorably (the others being distillers, slave traders and politicians). The founding fathers weren't right about everything (see slaveholding, freedom to vote), but they thought most things through pretty well. They knew, from experience, how important a free-press was to the proper functioning of a democracy, to the prevention of tyranny.

What remains, are newspapers hobbled by debt incurred by corporate owners, local television stations incapable of completeness and accuracy, national television networks embroiled in non-essential controversy and trivia, and the blogs (thank god for the blogs).

New Britain is a city famous for its history of graft and corruption. Not casting aspersions on any current office holders, but imagine what can happen in city government when no one's paying attention. I think history has proven, again and again, that civic leaders at most levels, are incapable of policing themselves.

That's why we need the press. And now two more watchdogs, albeit watchdogs with a feeble growl, and jaws lacking teeth, are gone for good.
Posted by Ed McKeon at 10:14 AM

>New Britain is a city famous for its history of graft and corruption.<

Compared to what Waterbury? Bridgeport? What about Danbury?

There isn't a city in Connecticut that hasn't had graft or corruption.

New Britain had pay-for-promotion civil service scandal that was resolved in the 1980s, or so, that led to quite a few reforms.

I agree with your overarching point. But The Herald and most newspapers are losing their ability to be watchdogs. I think that role will be assumed more and more by bloggers, community journalists.

Criticism taken. New Britain has no exclusivity on a reputation for graft. And maybe that's all in the past, but how would we know?

I just want you to know that as a 15-year reporter covering government in Bristol, I can manage a deep and scary growl and I'm only missing one tooth so this watchdog isn't ready for retirement.
You probably never see it, but The Bristol Press has always been, and remains, a pretty good paper, in spite of its corporate masters.
Other than that, bravo!

The point that was missed in the future closing of the local newspapers is that bigger doesn't make it better. Corporations are acquiring to acquire, chew out the assets and close the business with only the shell left. Government has to stop approving the purchase of other businesses. Let the mega corporatation come up with a new idea instead of buying someone elses.

Edward
really liked the article. I too love to read the newspaper every day...I'm sure Dad had something to do with it.(just like I like to listen to Broadway Musicals...and smoke cigars, from Pete Spilka)
Being at the Library I can read everything from the Herald to the Wall street Journal (which I rarely read...to tell the truth)Hope someone comes to the rescue of the Herald...but doesn't look like that is going to happen. Keep up the good work. Patty

Great commentary on a bad situation.

Great article. Oh, by the way the guy that said the Bristol Press is a good paper... he's wrong.