And now, all join in with the chorus, "Creepy Joe™ must go" 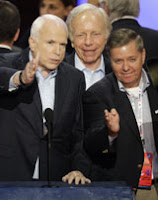 Right now, the last thing I want to do is think about politics. Like many of you, I'm wrung out, and I'd love to be heading off to some backwater for a few days of eating, drinking, listening to music and dancing (damn, I had that opportunity and blew it).

But one thing we need to do, is to contact our Democratic leaders and tell them that we, the people they represent, want them to drum Senator Lieberman out of the Democratic party. Senate leaders must strip him of his seniority and his chairmanships. And if Harry Reid isn't up to the task, let's get another leader. The Democratic caucus has got to tell him to take his Republican stump speeches and shove them up the tailpipe of the "Straight Talk" Express.

Did you see Lieberman's oily mug standing behind McCain, at every vicious campaign stop, right to the bitter end?

In fact, if there's any way we can trade him for a moderate Senator from a red state, I'd be the first to reach across the aisle and give Lieberman a good swift kick across the border.

Maybe Barack Obama can offer him the ambassadorship for Iraq, or Iran.
Posted by Ed McKeon at 12:33 PM

Did you hear Joe's attempt at fence-mending today, how he'll be glad to support President-Elect Obama?