Now it's your turn 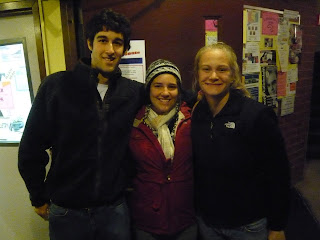 I voted this morning for Barack Obama, Rosa DeLauro, Catherine Johnson and no Constitutional Convention.

In my eight years of voting early in the morning at the Senior Center on William Street, I've never experienced a wait, much less a line.

A line of about 40 people greeted me when I arrived shortly after 6 a.m. This is the district where all Wesleyan students registered in Middletown will vote, and I encountered the first Wesleyan students to vote (other than absentee ballot, of course), and witnessed the voter in front of me who wasn't on the voting list (she was 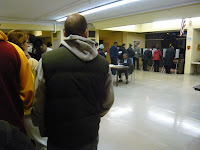 instructed to check at Snow School to see if she was still registered at her old address, before she considered voting on a provisional ballot.)

Remember, if you're voting late, as long as you're in line by 8 p.m. when the polls officially close, you have the right to vote, and the polls must be kept open to allow you to do so.

Also, if for some unforgiveable reason, you haven't registered, in Connecticut you are allowed to cast a vote for president at the Town Clerk's office (which is likely in your city hall). However you cannot vote for any of the underticket.
Posted by Ed McKeon at 6:43 AM