It came from the swamp 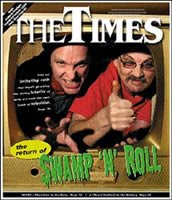 I didn't get my annual Louisiana fix this year, and I'm feeling it. The annual intake of capsaicin and fat via gumbo, cracklins, boudin, crawfish and sausage, and the endorphin rush it induces has been missing. And the hours of dancing to thumping accordion and fiddle music has left me restless and aching, especially after the Lieberman humiliation.

So I turned to the internet to watch a few episodes of one of my favorite lo-fi, vernacular-drenched, home-baked TV series, the truly inimitable, Swamp 'n' Roll (broadcastinng from Casa Ole in Opelousas, no less), hosted by my good friend Todd Ortego, and his longtime sidekick, Dr. Feelgood.

It's starting to work. A few two-steps with the Black Pot Playboys, some kickin' zydeco with Leroy Thomas, the heartbreak country of Drew Landry. All I need is a good pot of gumbo, and I know how to make that. 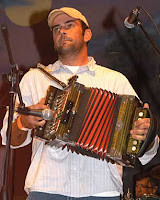 Of particular interest in the Swamp 'n' Roll archive is a set with Horace Trahan and the Huval-Doucet band, which now includes the Huval brothers, and Matthew Doucet (who looks the spitting image of his dad Michael). Trahan is back playing mostly traditional Cajun music, but his story is as instructive as it is tragic.

I met Horace first at a festival in Rhode Island when he was still a teenager. He played a mean accordion, and dressed in white shirt, tie, and a dress cowboy hat. No swagger, no flash. He was dedicated to tradition. When I saw him next, in the function room of city hall in Eunice, LA, he was fronting a zydeco band, and a few months later had a monster regional hit with "That Butt Thang," which is about, well, yes.

But instead of exploiting his success, he donated all the proceeds from his successful song to his newly discovered faith, and the church where he was saved. He quit music, then quit the church, then took up illicit substances, had a child, and just recently began playing music again. He's still an amazing player, deadpan and true, and his version of "Uncle Bud," is nearly as compelling as Boozoo's.

If I was in Louisiana tonight, I'd drive over to Casa Ole, where the next edition of Swamp 'n' Roll will be taped, and have a plate of enchiladas, a big margarita, and dance until it was time to change my shirt.
Posted by Ed McKeon at 4:04 PM