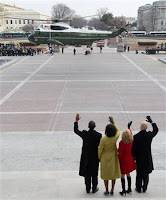 Leave it to Garrison Keillor to find the moment in the day with the most power.

Emotions ran high, but never as high as when the crowd realized that the chopper over their heads, the chopper heading away from Washington, was the chopper carrying the former president away from governance for the last time:
"When the blades started turning, the cheering got louder, and when the chopper lifted up above the Capitol and we saw it in the sky heading for the airport, a million jubilant people waved and hollered for all they were worth. It was the most genuine, spontaneous, universal moment of the day. It was like watching the ice go out on the river."

And I wrote all this before I realized Colin McEnroe had addressed the same topic yesterday afternoon.
Posted by Ed McKeon at 10:47 AM

Yes, good-bye to all that (with a nod to Robert Graves).