Pull back the shades, throw open the window, let the stink out 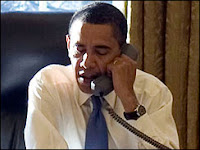 I have to keep reminding myself to remain skeptical, but Barack Obama keeps making me smile.

Yesterday he continued his repudiation of Bush administration policies regarding secrecy, influence, communications and openness. He took a stand against lobbying. He told his staff that they were working for you and me, and not for themselves. He declared that he was willing to talk to Iran and other enemy governments, without preconditions. And the day before he put a hold on military tribunals

Today, he'll close Gitmo and the secret CIA black site prisons, outlaw torture, or harsh interrogation, and he'll order a legal review of all suspected terrorists being held without the benefit of habeas corpus.

Wonder what he'll do tomorrow.

Of course, follow-through is everything, but so far he's delivering on his promise.
Posted by Ed McKeon at 10:57 AM

I get a sinking feeling when looking at the list of appointee's who are insiders and responsible for the fiscal and foreign policy mess.

If he wanted to make sure no progress was made with Iran he did a good job by appointing AIPAC's mouthpiece Dennis Ross as a special envoy. Let's not forget that his Chief of Staff is an anti-arab racist who actually served in the IDF.