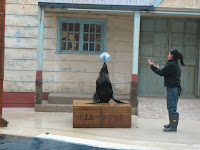 So, after volunteering to sit through a three hour Economic Development Committee meeting in Middletown, so that I could share the results with my fellow residents, I got home an listened, online to the podcast of Monday's Where We Live. The topic was "The Future of Newspapers."

It's a topic I'm passionate about, as a reader, a former newspaper writer, and a documentary film journalist.

I'm happy to say that an email I wrote to host John Dankosky got read on the air, but dismayed that the journalism professor (Paul Janesch) and the former NY Times reporter (Marcia Chambers) found it necessary to disparage the efforts of citizen journalism sites like The Middletown Eye, which I helped found.

Janesch posited that the Middletown Eye, and other local community newsblogs didn't display the journalistic discipline of real newspapers. Chambers indicated that unlike her newsite (kind of a blog), The Branford Eagle, The Middletown Eye is not staffed with "trained journalists."

I detect a bit of journalistic snobbery.

First off, I won't pretend The Middletown Eye is something it isn't. We are not a website attached to a print newspaper. We do not have paid staff. We don't have an office, or the ability (time) to dig for all of our stories the way a paid staff might.

But don't get me wrong. I'm not apologizing. The Middletown Eye is staffed by community journalists of all stripes. Some indeed are what you might call "trained" journalists. They have experience writing for print newspapers, magazines and journals. Some are professors. Some are artists, musicians, stay-at-home parents, ministers, business owners, civic activists, university employees, architects, environmentalists and others who care deeply about the town in which we all live.

All of us know how to write. I would conjecture that some of us know a bit more about research than most "trained" and seasoned journalists.

I will tell you this. We have scooped the Hartford Courant and Middletown Press on a number of occasions. We have been the media source (unaccredited), for newspaper, TV and radio stories. We have written stories which have made the US Army change course. We have exposed local issues and controversies for public scrutiny. And we covered the last election in town like no other media outlet could or would.

We've been around for seven months.

We try mightily to keep opinion separate from news reporting (though we are not always successful). We discourage anything that smacks of personal vendetta. We refuse to print anonymous assaults (though we will print non-threatening anonymous comments). And we are respected by town municipal leaders and residents as an accurate source of information. Our readership is small, but growing.

Certainly, some of what Janesch and Chambers say a "newsblog" ought to aspire to are lofty goals (goals, I might add, that many newspapers do not achieve) - fairness, accuracy, objectivity (to the extent that it can ever be achieved), insight, institutional memory, clear and spirited writing. We hope to be able to offer all or those things to our readership, and more, including a dedication to making Middletown a great place to live, for everyone who lives here (without becoming mindless cheerleaders).

By the way, that Economic Development Committee meeting I sat through resulted in a post which revealed that a gourmet food manufacturer wants to move to Middletown. No other "trained" journalist was at the meeting to report that. You won't read about it in the Hartford Courant or Middletown Press today. It was in the Eye at midnight.

The trouble with newspapers, as I've said dozens of time, is not the reporters, editors, photographers or graphic artists who toil for the dailies. It's the absentee-landlord corporate owners who have hocked the papers into debt-holes from which it is impossible to climb.

Finally, if examples of "trained" journalists are what we find in the ineffectual Washington press corps, or on cable news channel, I'd rather remain untrained.
Posted by Ed McKeon at 8:17 AM