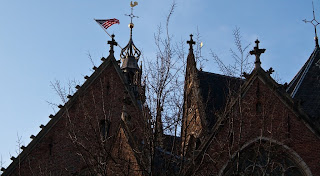 (American flag flying from the Old Dom in Amsterdam.)

This from Kevin Lynch in A'dam.

Wow! I went to A'dam with some friends and watched the innauguration there. There was a whole day of celebration. I saw a special carillon concert with music from American composers at the tower of the historic Oude Kerk (Old Church) in the city centre of Amsterdam. The Dam Square looked like Times Square on new Year's Eve. I heard from people in the city (including the Mayor of A'dam) that Rotterdam and Den Haag had massive gatherings as well. Apparently Dutch citizens everywhere were watching in bars and restaurants -- some of which set up big screens in every room to accomodate the expected crowds. Good thing they did...thousands of people, from all over the world, were packed into all kinds of venues! The party's still going on at 8pm our time...but I had to stop in this Internet Cafe and write you about what's up. It's amazing...and very touching, too. I had no idea it would be such a big deal. Lots of happy tears from onlookers. I was congratulated at least a hundred times! Glad I didn't stay home and watch on TV. I missed the Berlin Wall coming down by one day (I left Europe after a three week tour the day before it happened). This made up for it.
Posted by Ed McKeon at 2:48 PM

Thanks for this update from Kevin!

Thanks for the post, to both Kevin and Ed. It reminded me how proud I felt on election night last November. =)

This is off topic, but it's also good to hear Kevin's doing well. Although I haven't listened to the radio on Saturday mornings in many years, and thus had been missing Kevin's WWUH show for quite a while, I was sorry for the radio community when I learned of his relocation out of the country. I once met him at a small (promising but now defunct) bluegrass festival in Lanesboro, MA, and he was as genuine and friendly in person as he seemed on the air. Reading his short note, I could clearly hear his understated voice coming through.

Kevin also says that Bishop Gene Robinson's opening prayer for the Sunday "We Are One" concert was seen in Europe, while it was NOT here in the U.S.