Jim Calhon is out of control 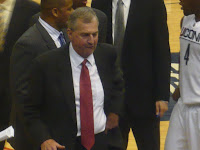 I was lucky enough to get some free tickets to a UCONN mens basketball game at the arena in Hartford. The seats were seven rows off the floor, and directly behind the UCONN bench. They couldn't have been any better. But for one thing. It exposed me to the derangement of UCONN men's coach Jim Calhoun.

I've met Jim Calhoun 3 or 4 times, and have always found him to be affable, funny, smart (I've discussed books and history with him), and willing to do good for charities in need. And I've defended him against people who say that his ranting during games are ineffective, outrageous and unneccessary.

His behavior is beyond the pale. This was a game against Stony Brook. It was significant only for the fact that Stanley Robinson, a player who left the squad and had been working in a factory, returned to the team.

Calhoun's over-the-top, histrionic, uncontrolled rage would have you thinking it was for the National title, and even then, the behavior would be embarassing, distasteful and wrong.

I heard him call a player a "stiff." He told another player he was "useless." And he didn't just tell them. His features grew contorted. He pointed fingers in the players' faces. He grabbed players by the arms. The veins in his foreheadbulged and his face was purple. He cursed more than one player out, using the most graphic of anglo-saxon profanities. He raced onto the court, during a stoppage in play, to berate one of his players, and was warned away by a referee. He even pulled this nonsense on his assistant coaches. He yanked players from the game for even the most understandable of mistakes - missing a difficult shot, allowing a skilled opposing player to score, missing a rebound. Jim, the ball is made of rubber. Sometimes it bounces the wrong way.

You don't have to be a genius to read the body language of players and coaches. On the floor, players are constantly looking over their shoulders in fear of making a move that would have them on the bench, and the focus of a tantrum. Coaches move funereally after being hounded by their coach to instruct a player about what went wrong. Players roll their eyes at the childish antics of their leader. Isn't the right approach to criticize the behavior, and not the player himself?

At the beginning of the game, an announcer makes a long announcement about good sportsmanship. At halftime, Boy Scouts are paraded onto the floor where they are honored for their hard work and praised for their respect. During the rest of the game, the head coach makes a laughingstock of these announcements. Certainly the sport is about teaching and demonstrating athletic prowess, but it's also about respect for tradition and rules. How does Calhoun explain his behavior in those terms?

Calhoun is a state employee. He's a coach, but as a university employee, he can be considered something of a teacher. Any other teacher would be fired for behavior like this.

There are other winning coaches who are in the hall of fame, who have garnered national championships, and who have the respect of their players, who don't act this way.

Calhoun is a bully. He's an enraged father-figure who can't control his emotional outbursts. He's a foot-stomping, berating, tyrant who has figured that if no one is going to stop him, he'll continue to do just as he pleases.

I know the press has criticized this behavior in the past, and those who have dared, have been ostracized.

Is the winning worth it? I enjoy UCONN games, and the wins, but I won't enjoy them as much as I once did. I would never allow a child of mine to be coached by a man like Calhoun. Most people will tell you that humiliation is not a tool for achieving what you want. It's the tool of a tin tyrant, an out-of-control parent, an authority who is controlled by rage.

Maybe Calhoun would tell you otherwise, and point to his own record.

I'd suggest he get someone to tape his performance for a few games, and then sit down and analyze that tape.

If he isn't embarassed, I'd be surprised. It's unacceptable behavior, period.

Maybe you can't teach an old dog new tricks, but you can get rid of an old dog.
Posted by Ed McKeon at 5:22 AM

apparently you have never played sports or on a team in your life. Calhoun is a hell of a motivator and gets the most out of his players. He also will go to any and all lengths to protect his players which he has when maybe he shouldn't of (laptops). Get a life. You say you would never let a child of yours play for calhoun, well guess what he's not coaching rec league basketball for little kids, He's coaching a division one national power house that generates millions for the University, and his players don't seem to mind, only an overly sensitive old man who scored some tickets to the game. And guess what, nobody cares if you are offended or your feelings got hurt by the big bad man yelling naughty words. Get a life!!!

Wow. "Get a life." Did you think that one up yourself?

Apparently you're willing to forgive anti-social behavior if it generates millions "for the university." Or is it for the sports programs at the university, and Calhoun's salary?

His players don't mind? How would you know that. How many do you know? How many players who have washed out of his program have you spoken to.

And you know what, people do care. You just don't care to listen to them.

I think that your observations are spot on and that you dont quite understand the life of a coach. Off the court from the couple of times that you met him he was a nice guy, which is true, he nice guy off the court. And then theres family Calhoun, Practice Calhoun and game time Calhoun, these are all three differenct Calhouns that need have differenct roles. Winning games is a coaches job and they are insane during games, they're abusive and loud and in your face. Its part of the game.

"His players don't mind? How would you know that. How many do you know? How many players who have washed out of his program have you spoken to."

I find Coach Calhoun's behavior very offensive, to the point where I am unable to say that I am objective about his character. He is revered because he wins games, not because he is a person of integrity. The players who want to go to the NBA have no real option but to accept, admire and lick his blank as he insults and demeans them. Because his repulsive behavior has no untoward consequences, he is encouraged to continue. He takes the pleasure of winning away from his players, replacing it with the fear of losing. This is the worst sort of coaching, the kind you should not be paid for at any level or tolerate in a volunteer. He takes away the pleasure of watching the games, too.

In my opinion there is no solution to his schizoid, low-character demonstrations as long as he wins enough games. It looked for a time that his lack of control was leading to Irritable Bowel Syndrome, keeping him off the court. For the good of all, including him, I hope these symptoms return soon.