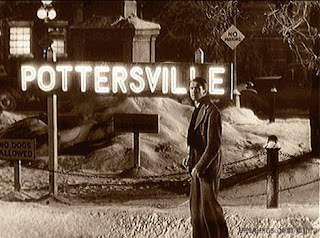 Yet another great analysis of It's A Wonderful Life in the New York Times yesterday. It seems as if the troubles we're currently experiencing is making Frank Capra's simple little Christmas movie into something prescient and instructive.

If you've ever paid any attention to art, you'll understand that poets, musicians, painters, novelists, playwrights and yes, filmmakers are at least as good as scientists in predicting what the future holds. The imaginative ability of artists to see the detail within the big picture, and to synthesize and create a new world, is what makes them so good at envisioning where a political movement will take us, or how an economic policy will fail us.

Anyway, Wendell Jamieson gives us his take on It's A Wonderful Life, and the way he sees it as an essentially dark, but redemptive tale.

His most amusing analysis is that Pottersville (the town Bedford Falls would become if George Bailey never lived), seems like more fun than Bedford Falls, and would have been, eventually, more prosperous as Pottersville.

In Jamieson's analysis of the movie, he points out the inconsistencies, and anachronisms. The one thing that always struck me as funny/weird/politically incorrect, is when George Bailey, running through Pottersville, is searching for the woman who would become his wife (Donna Reed as Mary Hatch), and Clarence the angel tells him, in horror, that he can find her at the library. Yes, she is unmarried, an "old maid," and, God help us, a librarian.
Posted by Ed McKeon at 7:13 AM