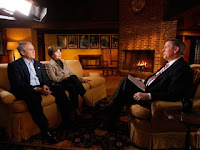 
Charlie Gibson gets George Bush to finally confess his regrets, several days late, and many billions of dollars short.

True to form, Bush sounds like an uneducated farm hand who has none of the real-world experience of a real farm hand.

Trying to be reassuring about the US financial system Bush says:

"Slowly but surely, the system is becoming unthawed, and it's going to take time for the system to become unthawed," he said. "What the American people have got to know is we've taken the steps to unthaw it, which is the first step to recovery.

Any third grader will tell you that "unthawed" means "frozen." And maybe that's what the dimwit in the White House really means, but I don't think so.

His legacy is sealed, and this is the icing on the ice.
Posted by Ed McKeon at 3:54 PM