Delivering the papers from death's doorstep 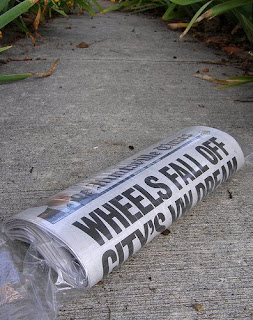 There's a lot of ink, and a lot of passion being expended about a potential helping hand for ailing dailies in New Britain (The Herald) and Bristol (The Bristol Press).

State legislators representing these two cities will be meeting with Joan McDonald, commissioner of the state Department of Economic and Community Development on Friday to discuss an economic incentive for any potential buyer.

The parent company of the Herald and The Press has said they well shutter these dailies, along with 11 weeklies if buyers are not found.

This week, the weekly Advocate newspapers, which are owned by The Tribune chain, which also owns the Hartford Courant and Fox 61 TV, features an opinionated story by Andy Bromage, accusing reporters for the Bristol Press of begging for a bailout.

Collins, who seems to have no fear in criticizing his corporate employers, naturally would like to see the paper saved, along with the jobs of his colleagues. He also understands, as do city leaders, the importance of having an independent newspaper in any sizeable city. Collins makes it clear that Press employees do not want the parent chain, the financially troubled Journal-Register chain, to receive any financial help from Connecticut, but would like the state to create an attractive loan package for any potential buyer.

There is no doubt that the corporate parents of many papers have made a mess of their media children.

But the issue of government assistance is thorny.

One of the most basic questions, being asked frequently, and as recently as this morning on WTIC-AM (see Mornings With Ray and Diane, podcast interview with Jerry Dunklee) is how to keep a newspaper free when they are beholden to a government. It's already an age-old struggle to keep advertising and editorial staff and management separate. Is it more difficult to write an anti-government editorial if a publisher's loan is hanging in the balance?

Another question is whether it's wise to invest in a business, which even in its most successful instances, struggles with retaining readership. Newspapers across the country are seeing circulation plummet. There is undoubtably a need to have a journalistic watchdog in each and every community. Time and again we see proof that political leaders and civil servants are not capable of policing themselves.

But is the ultimate solution admitting that the most important asset of a newspaper is its editors, writers and reporters, and that the legacy of ink and paper needs to be abandoned. Is it better for Steve Collins to expand his blog, sell ads, hire his colleagues, and throw off the capital expenditures and overhead which have contributed to the demise of the daily?

I love newspapers, and I hate to see any disappear. But I'm an aging, and amongst a disappearing population who feels the absolute need to hold the news in my fist. The generations coming after us are as comfortable examining news on media which doesn't leave smudgy fingerprints.

I encourage Collins, and reporters and editors across the state to cast off the burdens their corporate owners have placed on their shoulders and create something new with the talent, the institutional knowledge and the experience they've gathered through the years.
Posted by Ed McKeon at 11:04 AM

You may be right, but first we're going to do everything we can to save the Press. If we fail, then obviously other options need to be explored, but I truly hope that this 137-year-old institution will continue to serve Bristol for many more generations.

As a aging individual I believe we should save the newspapers. They not only create a media for individuals to learn what is happening in their community as well global news. The newspaper industry has been a vehicle for the younger individual to start a small business and create responsible traits. I started with the Grit Newspaper a moved to several other local papers. The electronic media just doesn't fill the void. I read the Courant online summary (not the pay one), NY times and Wall Street, MDN. If compare the electronic with the real news print you can see the difference. Let's save the newspaper industry by not allowing corporate greed to acquire companies strictly for making the CEO's paycheck bigger. Whatever happened to the stockholders and investors.