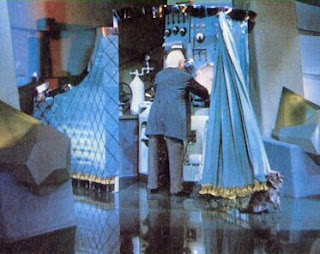 Sitting at a Christmas Eve party with my friend, and radio colleague, Stephen Allison, our talk came round, as it seems to these days, to the economy.

"It's a fiction, a fairytale gone wrong," Steve said. And I agreed.

"What's money but an act of faith," I added.

"You know, whats-his-name, Baum, wrote that story about the abandonment of the gold standard," Steve said.

"I didn't know that," I replied. "But it gives new meaning to 'Pay no attention to that man behind the curtain."

Allison went on to say that what the country, and the world needs at the moment is a good shot of optimism, even if it is fictional, because most of what we place our trust in - money, the stock market, the market economy - is nothing if not a fiction.

In fact, at least one book has been written about the allegorical interpretation of The Wizard of Oz. It's called The Historian's Reading of Oz. It considers everything from the collapse of farms after the Panic of 1893, the rise of Standard Oil, the gold and silver standards, and the cyclone as a symbol of political and social upheaval.

The point of our conversation is that the economic problems we find ourselves in are largely psychological, and fictional in their origins - as fictional as the economic glory we experienced just before the fall. Unfortunately, while the origins are a fiction, the outcomes are very real.

What we need is a leader who can sell "hope" as if he were selling "soap." For god sakes, the outgoing crowd sold us a war like it was a new HBO series, and most of America bought into it. Our new leader needs to sell us a recovery, because, in the end, a recovery begins when we all believe there is going to be a recovery.

In the New York Times today, Paul Krugman addresses the issue on a state-by-state level. He worries that austerity budgets demanded by state laws will hamstring recovery and will simultaneously harm the things that need the most protection - health care, education and the needy.
Posted by Ed McKeon at 9:32 AM