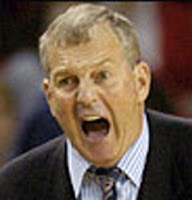 This is how it goes.

The wildly popular basketball coach blows a gasket during a game of little importance. He insults his players. He calls them names. He barks at his assistants. He stomps and pouts and turns red in the face. He throws one tantrum after another. He embarrasses himself, his team, his university and his state. And the media acknowledges that he was over the top.

But then he wins the next game. A big game. On national television. And the press, buying the coach's excuses, claims, this is why he screamed last time - so he could win this time. Humiliation equals victory. Degradation equals pride. Rage equals a "W."

I don't buy it, and any reporter who does is a cheerleader and not a journalist.
Posted by Ed McKeon at 2:52 PM

Although there is no arguing with success, we might argue the definition of "success". Or, move along to, the "means justifying the ends".

Since the Hartford Courant is moribund, perhaps this would be the right moment for a reporter with principles or a parent with athletic children to bring this issue back to prominence. Personally, I believe these methods do not attract the best prospects for the team.