WTIC-AM and the end of commercial community radio 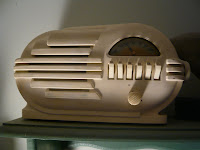 I can't say that commercial community radio is gone, because there are still some good, small, community radio stations that serve cities like Middletown and Waterbury, but the 50,000 watt "flamethrower" that is WTIC-AM, our state AM station, has abdicated, once and for all, it's role as a servant, or a partner in the community.

The corporate owners, and the local managers have decided to rid the station of any leavening effect that intelligence, reason, and fairness would bring to the imbalance of right-wing, misinformed, often-wrong, always-wrongheaded radio fare they present. As you likely know, WTIC-AM has canned Diane Smith, who was able to call out the worst instincts of conservative host Ray Dunaway, and they've also fired Colin McEnroe, a moderately liberal alternative to the heavyweight conservatives they regularly schedule.

I've listened to WTIC for as long as I can remember listening to radio. My mom's bakelite, faux Crosley, still sits in my office, a testimony to my love of radio, and its importance in my life. That radio was tuned to WTIC, permanently, and we listened to Bob Steele every morning of my school life.

Radio is important, and it's no coincidence that even in this day of the iPod and the internet, that when a government revolt or coup takes place, among the first places seized by the rebels are the radio station. Because with a broadcast transmitter, you have the power to get the word out to anyone with a handful of capacitors and resitors, and a coil of copper wire.

But corporate ownership, and the simple algorithm of conservative radio's being able to define a marketable audience, has changed it forever. WTIC has gotten rid of its best and brightest, and leaves us with the dull tarnish of announcers like Dunaway and Vicevich.

WTIC is a licensee of public airwaves. You can, and should, visit the station and ask to leave a complaint in their "public file." It's a file the FCC considers important when considering a station's commitment to a community. You can also complain to the managment, but that won't likely get you too far.

I want to thank Colin McEnroe for all the entertainment he's provided, but also for the good work of holding public figures to their word, and to the standards of their jobs. He's called out Joe Lieberman, Chris Dodd, George Bush (and his entire crew), and the police departments of Hartford and Avon. He's made some enemies, and it's likely that it hasn't helped him to keep his job, though it should be the reasons TIC would want him there.

And like hundreds who have left comments on McEnroe's blog, and on the blogs of his colleagues, I vow not to listen to WTIC again. These fifty years have been a good run, but when there's nothing there to please the ear or tease the brain to think, there's nothing worth tuning in for.

One final note, my WWUH radio colleague Doug Maine has a theory that may yet prove true. He writes:

Ed, eloquently written, and I couldn't agree with you more. I am in complete mourning, I am completely bereft, and I too will never, ever listen to WTIC1080 AM again. Not at any time, and especially not to the neanderthals crawling in the afternoon waves.

Colin a moderately liberal what world do ou live in

Excellent writing concerning WTIC.
The station still carries UConn
Sports. Other than that it's goodbye. What a waste land.