Another slap on the wrist for Creepy Joe™ 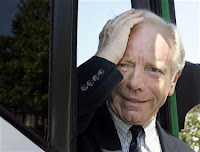 Apparently politicians are immune to the behavioral theory that bad behavior rewarded only leads to more bad behavior.

On Wednesday night, immediately prior to their holiday party, Connecticut Democrats gathered to issue a flaccid rebuke to Connecticut Senator Creepy Joe™ Lieberman.

While some state Dems are still angry, and were ready to show Lieberman the door which he had already used to flee the party, most others were less willing to send Lieberman packing a trunk to the trunked pachyderms.

Dems would do better than to underestimate the anger that Democratic voters feel toward Lieberman, and toward those who are providing the life vests which keep his sorry ass afloat.
Posted by Ed McKeon at 11:48 AM