Will there be a silver lining to the dark economic cloud hanging above our heads? 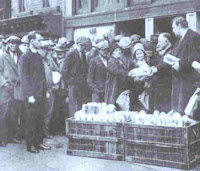 As we all watch years of hard work and savings disappear down the rat hole on Wall Street, it's hard to imagine something good coming from an economic bust.

Maybe it'll be enough to convince us that pinning our hopes, and our economy, on a bunch of manipulative, insecure, grubbing and greeding traders, is not such a good idea.

Maybe we'll be satisfied to see natural, and sustainable financial growth of a couple percent a year, instead of demanding gargantuan leaps of 15-20% a year.

We should be taking some example from the slow food movement, which emphasizes local production, organic means, sustainability and the enjoyment of real ingredients. These principles could easily be applied to our economy. And as Naomi Klein has suggested that a crisis is the time to demand change - real change, revolutionary change. From a New Yorker profile of Klein:

The New Deal is usually told as a history of F.D.R., she said, but we don’t talk enough about the pressure from below. Neighborhoods organized, and when their evicted neighbors’ furniture was put on the streets they moved it back into their homes. It was that kind of direct action that won victories like rent control, public housing, and the creation of Fannie Mae. The other thing that’s important to remember, she said, is that the organizers were a threat—of socialist revolution—and it was that which allowed F.D.R. to say to Wall Street, “We have to compromise, or else we’ve got a revolution on our hands.” Now, these market shocks are opportunities for the same reason that the crash was in the thirties, because we are seeing the failures of laissez-faire before our eyes. “It’s time to say, ‘Your model failed,’ ” she said. “This is a progressive moment: it’s ours to lose.”

And the people at Yes Magazine (yes, there's a Yes) suggest that the crash might actually make us shift our values in a positive way.

And they see a path to a new economy.

It's time we took the economy out of the hands of those who benefit by making the majority of us suffer.
Posted by Ed McKeon at 4:09 AM