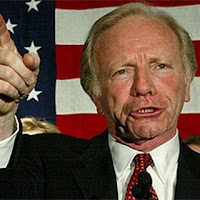 Old newspapers get cast aside, and in the past, stories may have been forgotten, but one thing is evident from the latest election - the web doesn't forget.

Want to know which Senator was involved in a scandal four years ago? Google it.

Want to be reminded which administrator lied us into war? Check your favorite anti-war site.

Want to quote a speech a congressperson gave about the strength of the American economy? Check a news data base.

If you don't think the internet has the power to remind the electorate about the scurrilous activities of politicians, ask Chris Shays, or Tim Mahoney, or Phil English, or John Sununu, or Elizabeth Dole.

And if you're a Democratic leader in Connecticut who is about to let Creepy Joe™ Lieberman off the hook, beware. Your actions will be remembered. In any other organization, Lieberman would have been fired summarily. Politicians just don't seem to have the will, or courage to dismiss someone whom they might need a favor from some day. And don't give me this baloney about conciliation. If Lieberman had no power, you'd drop him like a used tissue.

And, BTW, while Creepy Joe™ Lieberman claims he is still a registered Democrat, although he declares himself an independent, he ran for office on the Connecticut for Lieberman party. Of course, he created the new party (which incidentally has been pirated away since then by John Orman), to get a higher position on the ballot. And Secretary of State Susan Bysiewicz has said it's all on the up and up. So, in effect, Lieberman walked away from the Democratic party. Mayber Connecticut Democratic leaders don't, in fact, need to issue a censure and a disinvite, but instead, an invitation to re-join the party, and a new oath of loyalty for the errant senator to swear by.

But the next time you run for office, there will be a blogpost that will remind people just how unwilling you were to address the misgivings of the electorate in your party.
Posted by Ed McKeon at 9:06 AM