I make films for a living and teach a film course at Trinity College, and I'm often asked what my favorite film is.

Often I feel a prisoner of my own maudlin sentimentality when I tell a very hip student, or some cynical adult that my favorite film is Frank Capra's It's a Wonderful Life.

Most people are polite, but I'm sensitive about my choice, and I can pick up on even the slightest hint of a raised eyebrow, a dismissive clearing of the throat, or a bemused smile. 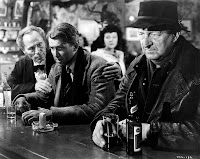 But, dammit, it really is my favorite movie, and a good one.

Dismissed frequently as "Capra-corn" it's a redemptive story which deals with the protagonist's slide from anger and depression (internal and external), and up to a thwarted suicide attempt. The reversal pivots on the appearance of an angel, a trip into the future (undoubtedly a lift from Dickens), and the ensuing transformation of perspective for our hero, George Bailey.

While thousands of DVD copies of this classic are sold every Christmas, and NBC hosts an annual broadcast (Saturday December 13, 9 pm EST) it's not, simply, a saccharine holiday movie. It has a complex structure which plays with the notion of time, a twisting plot, a legitimately great script (Capra with Frances Goodrich and Albert Hackett), and wonderful acting. In fact, I still think it's the best, most complex role that Jimmy Stewart ever played.

Capra's archives are housed at Wesleyan University, where they were the first to be acquired by the legendary creator of the film studies program Jeannine Basinger, who wrote a devotional to the film called The It's a Wonderful Life Book. I'm sure it's been done, but I'd love to see Basinger present the film at the Goldsmith Family Cinema on Wesleyan's campus some December.

At this point in my life, I'm happy to admit that I find it impossible to remain dry-eyed as I'm sucked into the film's themes of family, community, generosity and caring. But I am just as happy to be legitimized by The New York Times film critic, A.O. Scott's recent reassessment of the film.
Posted by Ed McKeon at 7:00 AM

I'm with you. I still think that the greatest American movie is Judy Garland's version of The Wizard of OZ.