We're in hell, see us waving? 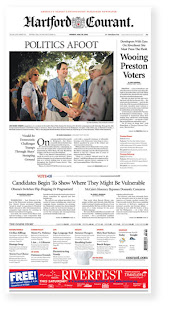 A nod to Susan Campbell for the line which I stole to headline this blogpost, and for the ongoing courage to bite the hand that feeds her when it's appropriate.

Campbell wrote a great column in Sunday's Hartford Courant about her love of newspapers, and the absolute necessity of solid journalism (newspapers) in a world prone to corruption, greed, cruelty and incivility.

I love newspapers too. In fact, I've always loved the Courant, except when I was hating it. A day doesn't go by, even now when it's a shadow of its former self, that I don't pore over every column inch. Even if I've missed it in the morning because of an early start on a job, and I get home late, I'll feel an obligation to read the Courant before I pass into sleep.

These days I've become my father, checking the obits first, but it was my father, who read three papers every day, who bequeathed his love of the printed word to me.

But I don't agree with everything Campbell says. While the Courant is AOCPN (America's oldest continually-published newspaper), a marketing boast which never earned a single reader, that fact is not enough to save it. As Campbell points out, the Courant has survived a lot. But that survival is not predictive of its future. There are a few companies of a century or more, which seemed as solid as Gibraltar (Lehman Brothers - 158 years, Washington Mutual - 110 years), and this year, they disappeared, or were absorbed by bigger companies..

But AOCPN can be a rallying cry, and I think that Campbell means it in that way. But it isn't her fellow reporters, editors and photogs she needs to convince. It isn't the readers, who are as anxious as she is for a paper with substance. It's the owners, and unfortunately, I don't think they have journalism, democracy, or even the lure of a well-told story as their first priority. If it's between the Courant and the almighty buck, I think the Courant's out of luck.

One more thing, I think Campbell is not exactly right about the lack of original reporting on web-only "newspapers." Just a look at the New Haven Independent will prove the point. But coming from a town, Middletown, which has essentially been abandoned by the Courant, I know that our little town blog is at far more civic meetings and events, in the past six months, than the Courant's staff is able to be at.

I hope the Courant survives, in it's ink and newsprint glory. And if the hard copy disappears, I hope it remains alive on the web. What's clear is that as long as there are reporters with the passion of Campbell, and her diminished team of colleagues, there will always be somebody to look over the shoulder of the crooked politician, the bullying cop, the overzealous developer and the under-represented citizen.
Posted by Ed McKeon at 9:47 AM

Yes, as long as there are reporters with Campbell's passion, we'll be fine. But even those of us who love journalism, who have ink in our veins, can't do it for free. And that's where all of this is heading.